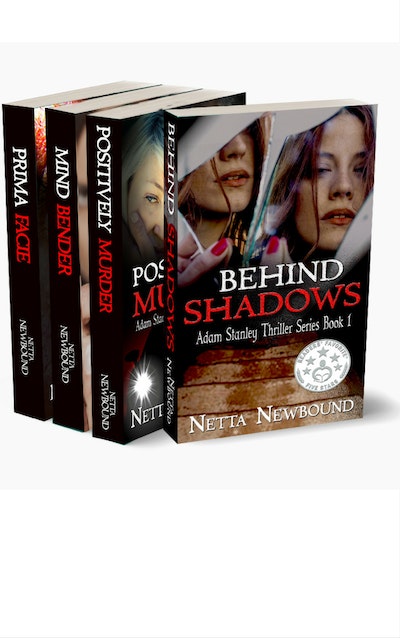 Just a quickie to let you know of an amazing 99c special.

Save a whopping $9 from the individual price in the Amazon.com store for a limited time only.

This best selling series is available in a boxed set and comprises the first 4 books from the thrilling series.

Behind Shadows
Amanda Flynn’s life is falling apart. Her spineless cheating husband has taken her beloved children. Her paedophile father, who went to prison vowing revenge, has been abruptly released. And now someone in the shadows is watching her every move.

When one by one her father and his cohorts turn up dead, Amanda finds herself at the centre of several murder investigations—with no alibi and a diagnosis of Multiple Personality Disorder. Abandoned, scared and fighting to clear her name as more and more damning evidence comes to light, Amanda begins to doubt her own sanity.

Could she really be a brutal killer?

Content Advisory: This book is intended for mature audiences and contains graphic and disturbing imagery

Positively Murder
For Melissa May, happily married to Gavin for the best part of thirty years, life couldn’t get much better. Her world is ripped apart when she discovers Gavin is HIV positive. The shock of his duplicity and irresponsible behaviour re-awakens a psychiatric condition Melissa has battled since childhood. Fuelled by rage and a heightened sense of right and wrong, Melissa takes matters into her own hands.
Homicide detective Adam Stanley is investigating what appear to be several random murders. When evidence comes to light, linking the victims, the case seems cut and dried and an arrest is made. However, despite all the damning evidence, including a detailed confession, Adam is certain the killer is still out there. Now all he has to do is prove it.

Mind Bender
Detective Inspector Adam Stanley returns to face his most challenging case yet. Someone is randomly killing ordinary Pinevale citizens. Each time DI Stanley gets close to the killer, the killer turns up dead—the next victim in someone’s crazy game.

Meanwhile, his girlfriend’s brother, Andrew, currently on remand for murder, escapes and kidnaps his own 11-year-old daughter. However, tragedy strikes, leaving the girl in grave danger.

Suffering a potentially fatal blow himself, how can DI Stanley possibly save anyone?

Evidence puts Muldoon at each scene giving the police a prima facie case against him.

But as the body count rises, and their suspect begins taunting them, this seemingly simple case develops into something far more personal when Muldoon turns his attention to Adam and his family.

This is a one off special so grab your copy today.

I thought you'd be interested to know my brand new book, Maggie, is currently available for pre-order and at a special pre-order price of 99p/c- details and links below. [...]